IAS Mock Interview – 2019
Due to COVID-19 pandemic, UPSC has deferred the IAS interviews scheduled from March 23 to April 3. Many students are yet to appear for the interview (date will be announced by the Commission after situation becomes calm).
At this stage, candidate can have Free DAF analysis session online with Bibhash Sharma, Director, Elite IAS Academy via Skype or Telephone. This is just a humanitarian gesture to help candidates appearing for Civil Services Interview-2019.
For Appointment call: 8588883939 or Email: info@eliteias.in

So it only makes sense that you do not get carried away in the thrilling excitement of having received the IAS interview call! So do not allow this success (howsoever you may feel like cherishing it!) to sweep you off your feet. A sensible individual would feel thrilled only when he has finally cracked the interview as well!

So, here are a few practical tips to see yourself as an IAS officer……………….

Competing in the interview is no child’s play. Besides, all who are called for the IAS interview have reached there after having cleared the previous examinations. So the competition is not to be taken for granted.

The IAS interview is the final stage that you must cross successfully before finally seeing yourself as an IAS officer! So it is best to keep your feet on the ground rather than feeling overjoyed and getting carried away by the moment.

Clearing the interview is not as easy as it seems!

The IAS Interview as A Personality Test

The IAS interview conducted by the UPSC is also referred to as the Personality Test. As already stated above, the interview is not as easy as it seems to be. So it must not be taken lightly. The IAS aspirant is interviewed by a board of interviewers comprising 5 members who are highly competent and unprejudiced.

The IAS interview plays a highly crucial role in the assessment of the personality of an IAS aspirant in order to decide whether he would be suitable to perform the duties assigned to him as an IAS officer.

Apart from assessing the intellectual capabilities of the candidate, the interview also assesses the following attributes of his personality:

The point to be noted is that an IAS aspirant is not cross-examined in the IAS interview; rather his personality is assessed so that his psychological attributes are revealed. Remember that the general knowledge and even the specific knowledge of the candidate have already been put to test in the previous papers.

However the aspirant appearing in the interview must not take his knowledge of GK (including all of the major current affairs) or other subjects for granted for if he does so, it only implies that his efforts to get through the interview, the last test to be an IAS officer are lacking somewhere.

Besides, there are quite a few topics that need to be prepared well for the interview, also referred to as The Personality Test for IAS. These topics are described below:

Whosoever clears the Prelims is required to fill the DAF i.e., the Detailed Application Form. The form requires the following details:

(8) Achievements in sports and extra-curricular activities,

Apart from the details of the candidate, the Detailed Application Form also asks for the following:

Thus the candidate is introduced to the interviewers much earlier than he actually enters the IAS interview room. No wonder he is interviewed according to the information provided in the form. Thus, it’s only reasonable that the candidate should be able to answer the questions that are based or related to the details given by him in the DAF. He might be asked about his hobbies, the native state, and his background in totality. Not being able to answer the questions based on what had already been provided in the DAF is not going to throw a very bright light on the candidate.

Thus it only makes sense to fill the DAF very carefully because later, the candidate would be asked questions based on the DAF only. So the process to score well in the interview begins right at the time when the IAS aspirant is filling the DAF.

Moreover, all of the candidates aim at clearing the Prelims and the Mains exam successfully. Not all finally succeed to do so. Thus when the candidate successfully cracks the Prelims and the Mains and is called for the interview, he is competing with all other candidates who have been equally capable, or perhaps even more so, as UPSC has called all of them for the interview only after they have cleared the IAS Prelims and IAS Mains Exam.

Thus it’s understood that each of the marks that a candidate scores in the interview plays a decisive role not only in the selection, but also the rank. Needless to say, among the toughest of the tough competitions, that is only rising further day by day, your score in the interview can make or mar the fulfillment of your ambition to be an IAS officer.

As the significance of the DAF has already been elaborated above, it only makes sense if all of the entries specified in the form are prepared for the interview in a highly comprehensive manner to the optimum. Quite a few of the tips are given below to do so.

Preparing for various entries in the DAF

The tips given below may help the candidate for preparing for questions based on various entries of the DAF effectively.

Besides, as already said earlier, the candidate must have a thorough knowledge of all the states etc., that lie in the neighborhood of his native place. In case any of these states is held to be important due to any reasons, e.g., historical, economical etc., the candidate should have all the facts on his tips. For example, if he is born in Gaya, he should be well prepared to answer any questions that may be asked related to Gaya.

Besides, as already said earlier, the candidate should be able to answer well regarding his hobbies and current affairs or for that matter whatever has been asked. The key to success is prepare well. And do not bluff. Admit if you lack in the knowledge while answering something. But you should know how to do so. Be logically courteous; seek permission while entering the interview room and before occupying a seat. Wear a confident, but gentle smile on your face.

How to Prepare for IAS Exam without Coaching?

The Knowledge of Current Affairs and IAS

IAS Interview: It Helps To Gain From The Experience Of The Successful Candidates 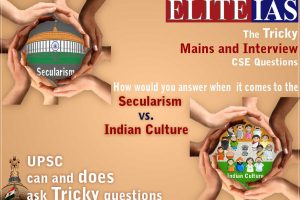 The Mains and Interview CSE do get tricky at times!

Loaded Questions: The Recent Trend in the CSE Pattern