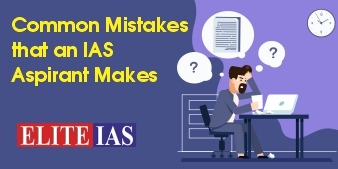 A huge number of the IAS aspirants are left highly disappointed year after year. In spite of studying in the hardest of the hard manner, they are not able to crack the Civil Services Exam and join the IAS. It is chiefly because that they make some of the most common mistakes that every IAS aspirant is prone to.

The major ones are as specified below:

1. Not solving the Test Series and the Mock Tests in the right manner:

Besides, solving the Test Series and attempting the Mock Tests in the same Exam environment as provided by UPSC during the Civil Services Exam would be a great added advantage. It would make it easier for you to face the IAS Exam later and with greater confidence.

The real smart attitude always advocates seeking the guidance when required. If you seek guidance today, you would probably be able to guide others tomorrow, that is, once you are selected as an IAS officer.

On the other hand, simply ignoring to seek the guidance when you actually need it may drag you, nay push you with a great force towards failure in the IAS Exam. Now, you can decide for yourself, what is better.

It is one of the most common mistakes made by a huge majority of the candidates facing the Civil Services Exam. They usually feel over-confident thinking that the Prelims being a qualifying Exam only, they do not need to prepare much for the same.

Again, it is another of the great myths that proves to be the undoing for most of the IAS aspirants. The truth is that it is not so easy to qualify the Prelims as is usually perceived by the aspirants.

And if you fail to qualify the Prelims, how can you go ahead with the Mains?

It again is one of the greatest mistakes made by the IAS aspirants. If you simply go on reading, you are not very likely to recall the required information during the Civil Services Exam. As a result, all your preparation and studying hard is simply going to go down the drain. Thus, it is only in the best of your own interests to revise and revise frequently.

A Word of Caution

Here is only a list of the mistakes commonly made by the IAS aspirants. The point to be noted is that the human mind is prone to errors. Needless to say, every IAS aspirant may make a few mistakes, apart from what have been described above.

As per the human psyche, no individual is completely perfect. All do make mistakes sometimes or another. But you are going to face none other than the IAS Exam.

As a result, it is only logical and in your own interests to avoid making mistakes. You should try to minimize them in order to optimize your performance in the Exam.

The best method to do so is practice a lot. And practice endlessly. Solve the Test series. Attempt the Mock Interview Tests. Seek guidance. Get all your queries solved. And do not forget to revise regularly.

Well, it’s ok to make a mistake. But it definitely would not be very pleasant if you do not clear the Civil Services Exam simply because of one of your careless drastic mistakes. So, where does the solution lie?

If you are guided in the right manner, you would simply avoid making most of the mistakes. And that would be far better helping you prepare for the IAS Exam in a highly competent manner.

And the right kind of the guidance would be available at a competent IAS coaching institution. It would help take care of a number of the complexities that you might face while preparing for the IAS Exam.

Keep A Track of Your Preparation to Crack the IAS Exam

How to Start IAS Preparation at Home for 2021

How to control feelings during the IAS Test Planning? 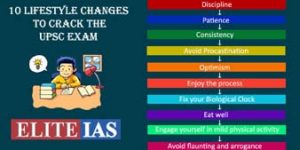